In responding to another post about how to approach the supremely fun beast of National Novel Writing Month (NaNoWriMo), I jotted down some of my immediate thoughts on the issue. This is my 9th year trying this insane activity, and here’s what I came up with:

Don’t fall behind! Getting a good cushion up front will really be helpful. Lock that editor up in a box and just keep writing until you hit your goal each day, preferably going beyond the limit when you can. That being said, if you do fall behind–don’t give up! Either try to catch up, or just shoot for making the day’s word goal until the end of the month. 10 or 25,000 words is still better than zero. My boyfriend has been doing NaNo for over ten years, and nearly every time he basically doesn’t start in earnest until the last freakin’ week, and he still pulls it off. The last four years I’ve managed to write between 80 and 100k instead of the usual 50k. It seems like a huge endeavor (and it is), but if you keep pushing yourself and don’t give up, you can easily go beyond the minimum. I’m working on being more structured, but in the past I’ve been a total pantser and haven’t planned anything, so if you’re not totally prepared, don’t let that stop you. The book’s called “No Plot, No Problem” for a reason! But if you want to plot, and you need quick tips, I linked to a few good methods in this blog post.

Trying to reframe some of NaNo’s challenges as positive things can also be helpful. I like to think of NaNo as a great time to practice intense focus, in a good way. You have a great excuse to turn off all the social media and avoid other random time wasters because you really need that time for writing. It’s also good incentive to be efficient with whatever required projects you have to do–I’m finishing two graduate programs at the same time, one of which is a PhD, and working, and doing internships. It seemed like writing anything, let alone a whole novel, would be impossible, but it just means you have to stay on top of everything. Get those required tasks done so you can use the rest of your waking hours for writing! 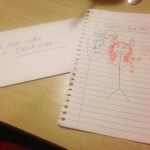